Imagine you wake up in the morning and first thing you see is your room windows with Eiffel Tower surrounding scenery, even better you can have Yellowstone National Park best sight or the view of high altitude of Himalayan rocky mountains of Everest. Anything! Customize it whatever you want to see. This is the potential of an awesome transparent smart window that we are going to show you. 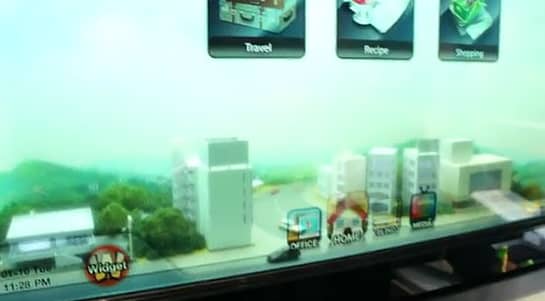 If you have attended, you might have seen this at CES 2012, the annual event of largest consumer technology exhibition participated by giants like Apple, Microsoft, Samsung, HTC and others as well. Samsung has done it again as usual, this time one of their coolest gizmo is the Samsung’s Transparent Smart Window. See the video below first.

Awesome isn’t it? Not that its very new to some, but after watching it we cannot imagine the vast potential of how the technology will revolutionize our near future. From room and house windows to car and airplanes.

What? Even better, this window technology has started taking its place to car manufacturers like BMW, GM and others too. The next video brings you how this window tech will be use in all of our cars in the future, or sooner than that.

What do you say? Can’t wait are you? Same here.