It is becoming much harder to live without the help of a smartphone.  We are becoming dependent not only on the ability of these phones to allow us to call others when we are out and about, but to also help us communicate in a variety of other ways.  Smartphones allow us the access to all of the information that we need to accomplish our activities for the day.  They help keep us organized and allow us to know what we need to do next and how to do it.  They are becoming an essential tool for both work and home use, but they do have some limitations.

Smartphones are essentially small computers that we can use wherever we are.  The best thing about smartphones is their portability.  The biggest problem that people have is that smartphones are not as fast or as powerful as the computers they have at home and this limits how much they can be used.  Samsung is well aware of that problem and has come up with a new processor that helps resolve the biggest issues that people are having with their smart phones, The Samsung Exynos 5 Dual CPU. 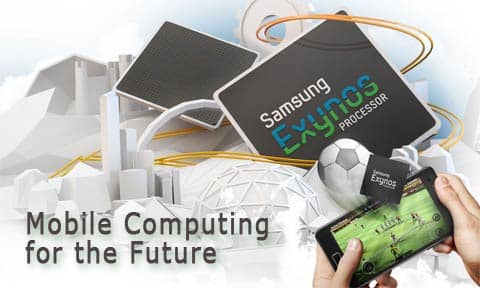 The Samsung: Exynos 5 Dual CPU is going to help resolve the problems that people are having with the speed of their smartphones.  This new processor includes a dual core 1.7 Ghz CPU that is designed to allow people to get the experience they expect from any computer.  This enhanced CPU allows the smartphones that use it to run better graphics cards which lets the user watch their high definition videos without hesitation.  It also is better for many of the 3D applications that are becoming more popular.  All of the advances in this computer combine to make the experience of using a mobile phone more like the experience that people are used to on their home computer.

While speed of the mobile phone is one of the things that concerns users, the life of the battery is something that is much more on people’s minds.   There is nothing worse than being out and getting the low battery warning light on the phone.   If you are not able to plug it in somehow, the phone will not be useable.  People are resorting to drastic measures that include carrying extra batteries with them.  They also limit some of the things that their phones can do so that they do not drain the batteries as quickly.  Instead of using these types of tactics that limit the ability of your phone, the Samsung: Exynos 5 Dual CPU is designed to use less energy than other processors.  This means that it will make the batteries in the phones last longer without having to limit what the phones are capable of doing.  It does not make sense to spend a lot of money on a smartphone and then not be able to use it fully.  With this new CPU, you won’t have to do that.

Computers have come a long way in a relatively short time.  It is fair to assume that the big computers of old are a part of history and eventually mobile computers and similar devices will be the main type that people are turning to.  With developments such as the Samsung: Exynos 5 Dual CPU, we are a little closer to that reality.

And just for your better understanding, view this short clip about “Samsung Exynos 4 Quad and 5 Dual processor”.

WPTidBitshttps://wptidbits.com/
Owner of WPTidBits. Totally in love with WordPress!
Previous articleWhat To Expect In iPhone 5
Next articleWeekly Inspiration and Web Design Resources no.35