Games have always taken a center stage when it comes to describing the evolution of the human race. Different games have been played over the years, not just to pass time, but to learn, compete and excel. There have been games at every step of human evolution and the trend continues, albeit in a quite different way than that of the yester years.

Computers changed the face of gaming as they introduced an era of intelligent programming and now with the mobile revolution in the making, the trend is set to continue. Smartphones and tablets are no more gadgets for the super rich as they are now owned and operated by millions of users across the world. The mobile revolution has opened doors for the game developers as the industry is in its nascent stages with vast terrains yet to be tapped.

The introduction of the apps system in mobiles has been the real reason for the success and growth of the mobile games. While earlier the mobiles were preloaded with simple games, the smartphones have given the users the ability to download apps of their choice. These apps can be paid or free but they certainly indicate the popularity of the app giving rise to another sector in the mobile industry, that of mobile advertising. More youngsters are going for the paid apps as they provide them with better games with more challenges unblocked. 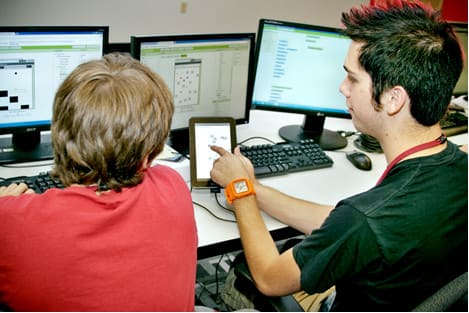 The top grossing apps both in the Google Play Store for Android based mobiles and the iOS Application Store for iOS based devices, are game apps. There is no particular segment or type of games that are popular but range from strategy games to card games and from social act based games to slot games. People from different age groups play different games. What was once considered the domain of children has now engulfed the adults as well. While some games are predominantly played by males, there are others that are gender neutral and are liked by males and females alike. One can find individuals hooked to games like ‘Subway Surfers’, ‘Angry Birds’ and ‘Temple Run’ while happily comparing scores and levels with their fellow colleagues or even total strangers. Therefore the mobile game developers have a pretty vast area to look at when designing games for mobiles.

The mobile revolution has entered into its sixth year with the sales of smartphones picking up. While the developed markets like Europe and the U.S. are on the brink of saturation of smartphones, emerging markets like China, India, Middle East and Eastern Europe are still showing growth. This trend is likely to continue with the emphasis on games. It is estimated that these markets would continue showing improvement in the sale of smartphones and tablets at least for another five years which means opportunities for game developers to bring out revolutionary games for these markets.

The present trend is that of owning a mini computer as it lets one work while on the go and this is being satisfied through the ownership of a smartphone. While there are many applications that are used on these smartphones, it is the gaming applications that are first downloaded and checked out. What more, the users always go for an upgrade as and when, they are introduced giving opportunity to the developer to save newer versions for  later. Therefore a mobile game developer has the opportunity to break into this zone and earn pretty well.

The golden age of mobile gaming has begun and it shows further prospects down the years. Game developers have a lot of work at hand as the possibilities of new games are endless.

WPTidBitshttps://wptidbits.com/
Owner of WPTidBits. Totally in love with WordPress!
Previous articleEasily Installing Media on Your Website
Next articleGamers OS Showdown: Windows 8 vs. Windows 7 vs. Windows XP