Speculations about the iPhone 6

Apple is ready to launch astonishing iPhone 6 in the market. Since its competitors like Samsung, HTC, and Sony Xperia are already enjoying the attention in the market, Apple has already calculated the potential features to be offered to its clients. Apple released a great portfolio of products previous year with iPad Mini (Retina Display), iPad Air, iOS7 and iPhone 5S, which gave a pretty clear idea what the cell phone giant is bringing up next. As the insights given to us about the iPhone 6 during WWDC developers’ conference, there are certain rumors roaming around about the iPhone 6 screen size. Since Apple is in direct competition with the big screened Samsung Galaxy or other Android phones, it is rumored that the iPhone 6 is going to be released in two different sizes to give tough competition to the competitors. Apple has not really confirmed the release date of iPhone 6, but looking at its previous release pattern of iPHone 5S and iOS7, it is speculated to be released in September this year.

According to the reports of GT Advance, the sapphire glass to be used in iPhone 6 will be shipped to China in July which makes the expected release to be in September. According to another source of Supply Chain in Taiwan, the iPhone 6 with 4.7in version would be released in August whereas its larger version of 5.5in is expected in September. According to the statements of sources, Applell produce around 80mn iPhone 6 by the end of 2014.

Now as the rumors are taking pace for two screen sizes of iPhone 6, it is evident from various sources and potential features like the battery is redesigned to be fit for larger case or screen. Now with enlarged screen size comes the question of resolution. Will the resolution be same for both the screen sizes, same as earlier iPhone 5S or will it experiment a new set of sizes in order to compete with its Android counterparts. Apple usually chooses the screen resolution that can be scaled from its previous versions. Since the previous iPhones and iPads do not have Full HD resolution, we should not expect it in its latest iPhone 6 as well.

According to Ming-Chi Kuo, KGI Securities analyst, both the new screen sizes will come with different resolutions. The 4.7in set will have a slight bigger size as compared to S5 with 1334×760 screen resolution and a pixel density of 326 ppi. On the other hand, the large size of 5.5in phablet might have full HD of 1,920×1, 080 resolutions and a pixel density of 401ppi. However, large size is not really the goal of Apple since its main focus is to retain image quality as it is known for its high quality screens and resolutions.

As far as its design features are concerned, there are visual rumors spread all over the internet about its casing, designing and thickness. You can easily look out for the latest iPhone 6 Dummy Model video and certain images on the internet, which are allegedly leaked from the Foxconn factory. Certain images are posted below for your insight: 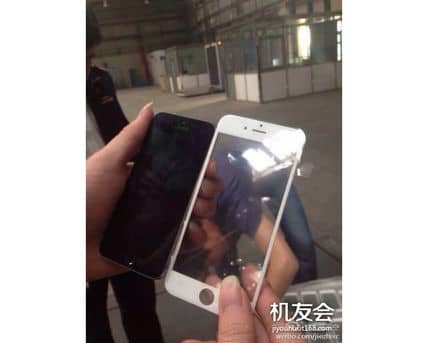 Both the images indicate the casing of iPhone 6 that is rumored to be thinner than recent iPhone 5S, around 6mm-7mm that is closer to an iPod. The design indicates a lot curvier edges like iPhone 5C and iPod Nano rather than sharp edges like iPhone 5S.

During the whole speculative scenario about the iPhone 6 screen sizes, a lot of its parts and features have been leaked on various sites. These are home button, front-face camera, ear speakers, ambient light sensor, batteries sizes, and the backlight panel.

WPTidBitshttps://wptidbits.com/
Owner of WPTidBits. Totally in love with WordPress!
Previous articleBoost Your Productivity And Speed Up Your Blogging Success Using These 5 Great Tips
Next articleSecret strategies that apple follows